This episode of Aurangabad Buzz podcast we have Akash Khonde who is an Artist, Author, RJ, YouTuber and Founder of 'The Flying Mic'. 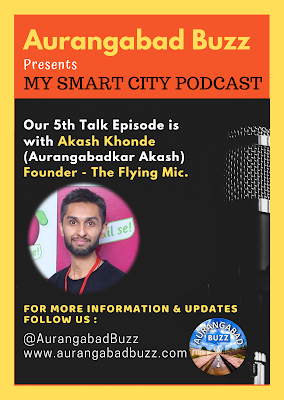 Sixteen migrant laborers, who were trying to return to their home State Madhya Pradesh on foot, were killed on Friday when they were run over by a goods train at Satana village in the limits of Karmad police station around 5.30 am. A goods train ran over them between Jalna and Aurangabad districts, nearly 260 km from here. One was seriously injured, while three escaped.  The scene at the tragedy’s spot was gory and the blood-stained Rotis, some torn currency notes, clothes and the victims other belongings were strewn around. On reaching the spot, police and railway administration found it difficult to gather workers’ limbs that too were strewn around, shifted the workers' remains to the government medical college and hospital (GMCH) at Aurangabad for post mortem. Even the four who escaped with bruises and are still under shock too have been shifted to the GMCH. According to the Aurangabad police authorities and railway officials at the Nanded division of the South Central Railway (

As we all know due to COVID-19 Pandemic there has been many difficulties faced by everyone of us. And to stop corona virus lockdown have been imposed on various states and areas as per their number of corona patients detections. This has resulted us to discomforts and irregularities in our lifestyle, working etc. But for many these haven't been as easy as it seems, it's even worse. Laborers and workers who earn on daily wages have been affected badly and they can't help themselves. So, to help and resolve these issue  'Naujawanan-e-Aurangabad Helping Group'  came forward and distributed hundreds of kits to the poor and needy families living in Aurangabad City and to the nearby rural areas like Naregaon, Padegaon, etc. Even after the implementation of strict lockdown several times and especially in the holy month of Ramadan the group kept fasts and helped for the need of humanity. Here are some photographs of the people which were clicked among their friend circle to