Sayyid Sirajuddin, commonly known as Siraj Aurangabadi (1715 - 1763), was an Indian mystic poet who initially wrote in Persian and later started writing in Urdu. 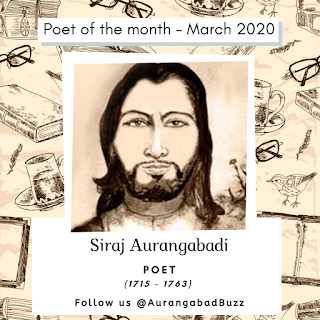 The anthology of his poems, Kulliyat-e-Siraj, contains his ghazals along with his masnavi Nazm-i-Siraj. He was influenced by Persian poet Hafiz.

He had also compiled and edited a selection of Persian poets under the title "Muntakhib Diwan". The anthology of his poems, entitled Siraj-e-Sukhan, was included in Kulliyat-e-Siraj. He stopped writing poetry at the age of 24.

In his later life, Aurangabadi renounced the world and became a Sufi ascetic. He lived a life of isolation, though a number of younger poets and admirers used to gather at his place for poetic instruction and religious edification.

His ghazal Khabar-e-Tahayyur-e-Ishq has been sung by Abida Parveen and Ali Sethi paid a tribute to the singer by singing the same ghazal in 2020.