As many as 69 illegal statues of great men, who over a period of time are being symbolized as representatives of particular castes or communities have come up in the jurisdiction of Aurangabad rural since January. 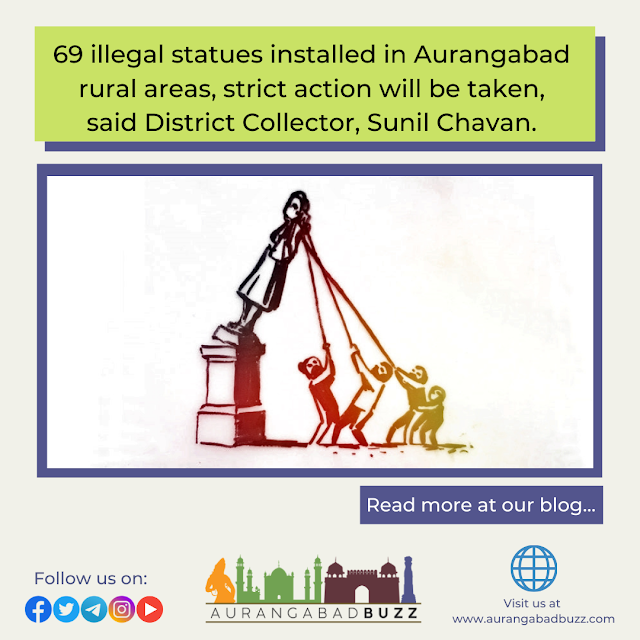 Authorities said that as a mark of supremacy and dominance in a particular area, there has been a kind of race amongst different communities to illegally install statues at crossroads and important junctions of towns or villages. Also, there have been multiple incidents of people putting up flags of different colours which symbolizes particular castes.

Only five offenses of such incidents have been registered this year while only three illegal statues have been removed. When contacted, district collector Sunil Chavan said, “We will not tolerate such things and definitely strictest action against those installing illegal statues and creating a law and order problem will be initiated.”

To bring a check to the menace which at any point of time could trigger law and order situation, Aurangabad rural superintendent of police Mokshada Patil recently warned of suspending policemen apart from naming the gram sevaks and village sarpanchs as accused in the FIR if illegal statues are found installed in their jurisdictions. But, the phenomenon is far from over. Patil told TOI, “Despite the Covid-19 crisis, police have been active in addressing this issue. We have had a dialogue with several stakeholders. We have sent correspondence to ZP and the collector office for taking the necessary steps. Police will lodge strict offenses if any illegal statue creates a dent in law and order.”

Another police officer has blamed the Zilla Parishad, district as well as local civic administrations for turning a blind eye to such incidents and failing to lodge complaints. “The properties where these statues have been illegally installed are governed either by the ZP or by the district collectorate and, therefore, they are duty-bound for lodging a complaint. When contacted, ZP CEO Mangesh Gondawle said, “We will definitely look into the matter. We are ready to co-operate with the police in every possible manner in addressing the issue.”