Yellow tigress Bhakti who gave birth to two cubs on 3 April 2021 and has experienced motherhood for the first time while Veer, who was a white tiger and the biological father of the new-born cubs.

The first white tiger cub who took his last breath in the zoo on Saturday, 10 April and died due to internal bleeding, claimed the autopsy report. As per the post-mortem report, the cub died due to internal bleeding. The zoo officials said that the cub suffered injuries on April 6, after it came under its mother's feet. The mother of the two cubs - Tigress Bhakti - did not feed them since their birth. As a result, the forest officials offered goat milk to the cubs. While the second cub who died on Wednesday, 14 April within four days of its siblings death — sparking outrage among wildlife experts. 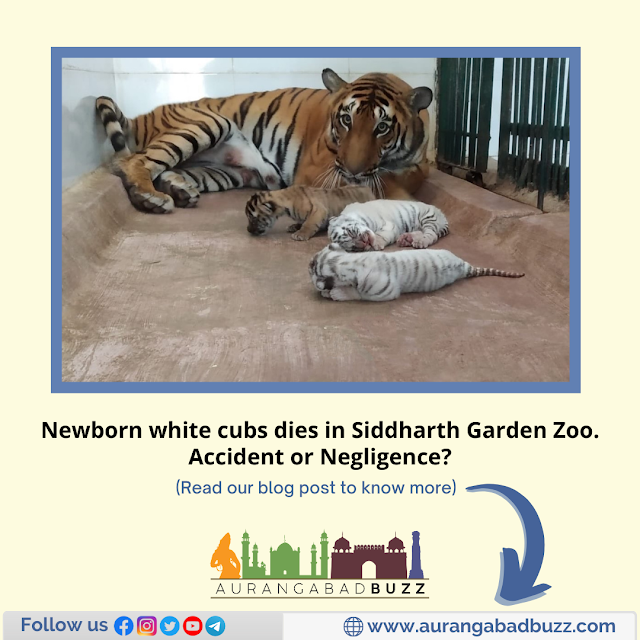 “Bhakti had not been feeding her cubs since their birth. After the first cub’s death, the second cub had been receiving due care. But its health deteriorated before it died around 10.30 pm on April 14,” an official statement said.

Honorary wildlife warden Kishor Pathak blamed the zoo authorities for the cubs’ deaths. “There are well-established protocols for handling cubs that are rejected by their mothers after birth. The zoo does not have qualified and skilled staff to follow such protocols. That is the cause for the untimely deaths of the two new born cubs,” he said.

Recalling similar incidents in the past — including the deaths of two leopard cubs in March, 2016 —Pathak demanded that the zoo be closed with immediate effect. “The central zoo authority of India was right in ordering the closure of the Aurangabad-based zoo in the recent past. But the decision was reversed due to political pressure. The zoo should be closed and all creatures housed in it must be shifted as soon as possible till the facility is shifted to new place with all approved staff in place,” he said. Wildlife activist Hemant Chhajed said the flaws in the process of the cubs’ post-death formalities.

“As a tiger is a schedule-I wildlife animal, an officer of the rank of deputy conservator of forest must at least be present during the post mortem and other formalities. The zoo authorities violated the crucial norm,” he said demanding a high-level inquiry.

While acting zoo director Shaikh Shahed did not respond to phone calls or text messages made to him, seeking his stand on death of cub.