The encroachment removal team of the Municipal Corporation encroached on about two and a half acres of land in front of the historic Bibi-ka-Maqbara on Tuesday, 29-06-2021. Two schools were started on this place and the place was taken over by installing tapas and cement pillars. The site was vacated and handed over to the Archaeological Department. Opposing the action of the Municipal Corporation, a woman blocked the JCB but the action was completed after the police took her into custody. 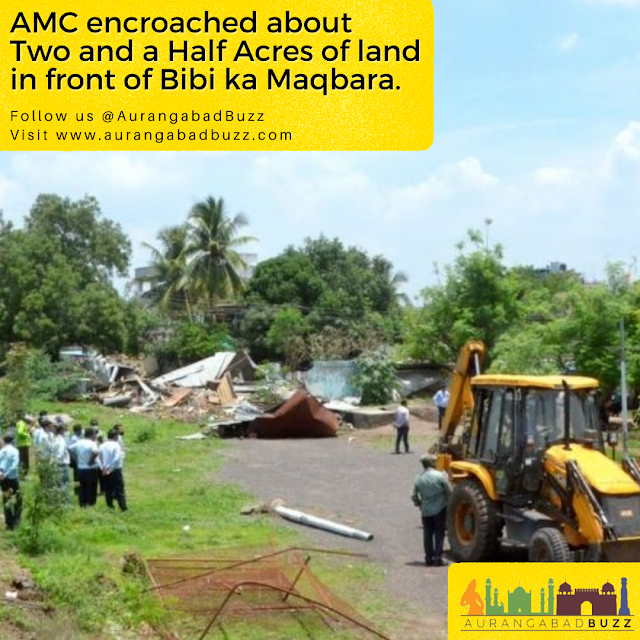 The historic Bibi-ka-Maqbara area is littered with encroachments. These encroachments had disfigured the tomb area. It has been decided to develop the tomb premises through the Smart City campaign. Many people claim to own the place. So it was decided to delete the encroachments. In this regard, Superintendent of Archaeology Dr. Milind Kamar Chavale had given a letter to AMC. Accordingly, Administrator and Commissioner Astik Kumar Pandey ordered to remove the encroachment. Meanwhile, the Aurangabad Municipal Corporation had issued a notice to Jayaraj Pandey who had rushed to the court against the notice issued by the AMC and the Archaeology Department. The application was heard but the court did not grant relief to Pandey. The encroachment removal department took action on Tuesday after the lawyer Deepak Padole on the AMC panel informed about this. When the team led by Additional Commissioner Ravindra Nikam reached for the action at 11 am, the action was opposed.

It has been also said that a woman walks into a mess in front of the JCB but with the help of the Begumpura Police the situation has been handled. After that, in about two and a half hours, the entire 2.5 acres of land was vacated by the Municipal Corporation and it was handed over to the Archaeological Department