His real name is recorded in history as Shamsuddin Mohammad Vali. Also known as Wali Deccani, Wali Gujarati and Wali Aurangabadi, He was a classical Urdu poet from India. Born in 1667 at Aurangabad, an important city in the present Maharashtra State.
He was a classical poet who has set a trend by establishing Urdu Ghazal in Delhi. He has helped poets by inspiring them to write poetry in Urdu. 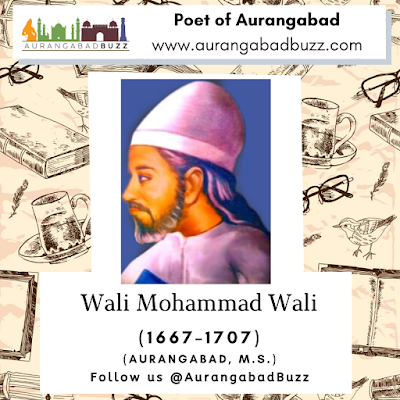 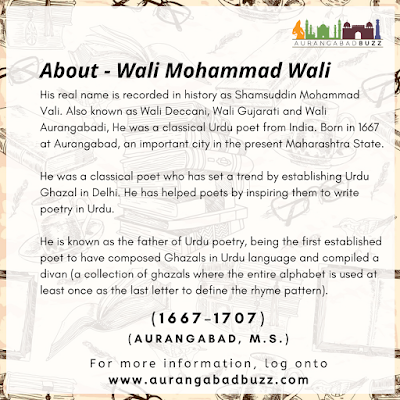 He is known as the father of Urdu poetry, being the first established poet to have composed Ghazals in Urdu language and compiled a divan (a collection of ghazals where the entire alphabet is used at least once as the last letter to define the rhyme pattern).
Before Wali, South Asian Ghazals were composed in Persian, almost being replicated in thought and style from the original Persian masters like Saa’di, Jami and Khaqani. Wali began, using not only an Indian language, but Indian themes, idioms and imagery in his ghazals. It is said that his visit to Delhi in 1700, along with his divan of Urdu ghazals created a ripple in the literary circles of the north, inspiring them to produce stalwarts like Zauq, Sauda and Mir.
Wali Mohammed Wali’s visit to Delhi in 1700 is considered to be of great significance for Urdu Ghazals. His simple, sensuous and melodious poems in Urdu, awakened the Persian loving poets of Delhi to the beauty and capability of “Rekhta” (the old name for Urdu) as a medium of poetic expression. Wali Mohammed Wali’s visit thus stimulated the growth and development of Urdu Ghazal in Delhi.
His favorite theme was love – both mystical and earthy – and his characteristic tone was one of cheerful affirmation and acceptance, rather than of melancholy grumbling. He was the first Urdu poet to have started the practice of expressing love from the man’s point of view, as against the prevailing convention of impersonating as a woman.
The impact of Wali’s original poetry is lost to some degree when translated into English but here is a good example of one of his poems, written in the form of couplets. It is called If the Heart Achieves the Status of a Mirror:
Wali Mohammed Wali died during the year 1707 in Ahmedabad, the capital of the state of Gujarat. He was 40 years old.   He was buried in that city but, unfortunately, his memorial tomb was razed to the ground during an attack by a Hindu mob who were rioting during the year 2002. Lovers of Urdu literature and the general public protested strongly about this desecration. 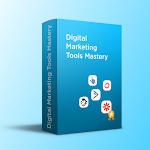