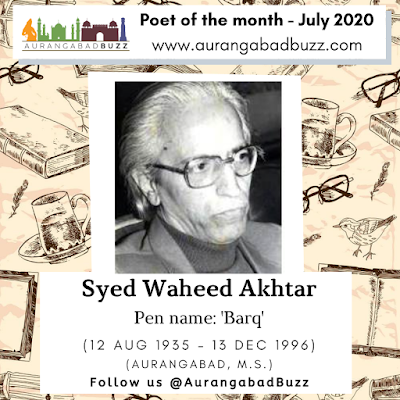 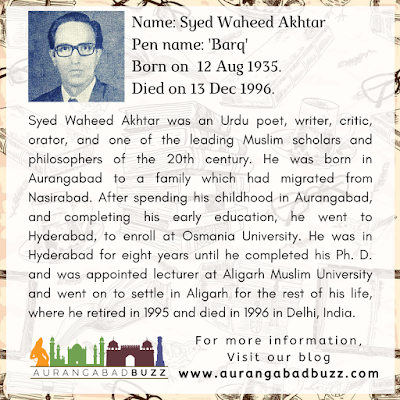 Syed Waheed Akhtar was an Urdu poet, writer, critic, orator, and one of the leading Muslim scholars and philosophers of the 20th century. He was born in Aurangabad to a family which had migrated from Nasirabad. After spending his childhood in Aurangabad, and completing his early education, he went to Hyderabad, to enroll at Osmania University. He was in Hyderabad for eight years until he completed his Ph. D. and was appointed lecturer at Aligarh Muslim University and went on to settle in Aligarh for the rest of his life, where he retired in 1995 and died in 1996 in Delhi, India.
Syed Waheed Akhtar wrote prolifically in Urdu from a very early age and during his initial years he adopted the pen name "Barq". Besides his collections of Urdu poetry Shab Ka Razmiyah, Paththaron ka Mughanni, and Zanjeer ka Naghma. He has published a collection of Elegies (Marsia) of the martyrs of Karbala by the name of Karbala Ta Karbala. He also contributed to numerous talks, discussions, and poetry recitations at All India Radio Stations.
For more poets of Aurangabad, Visit our blog www.aurangabadbuzz.com
Also follow us on Facebook, Twitter, Telegram and Instagram @AurangabadBuzz